The Wire Loop Game VR is an upcoming VR game for HTC Vive (required). It follows the same rules of the traditional physical Wire Loop Game, but adds a timer to each round. Players need to guide a metal loop from one side of a metal wire to the other. if the metal loop and the wire collide, you lose the round.

Here’s an image showing people playing wire loop game at the SWE conference 2013. In that physical version of the game, if the player touches the metal pipeline, it closes an electric circuit that makes a sound, this sound tells the players that the player touched the wire and failed. 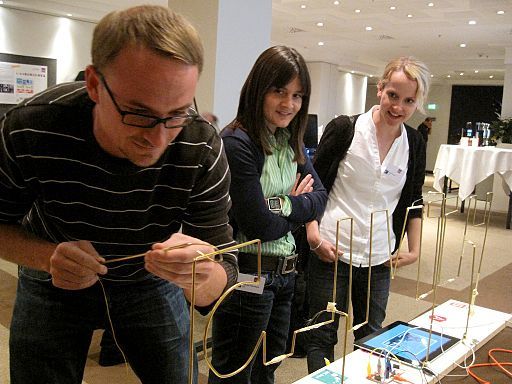 Here’s how The Wire Loop Game VR looks like… 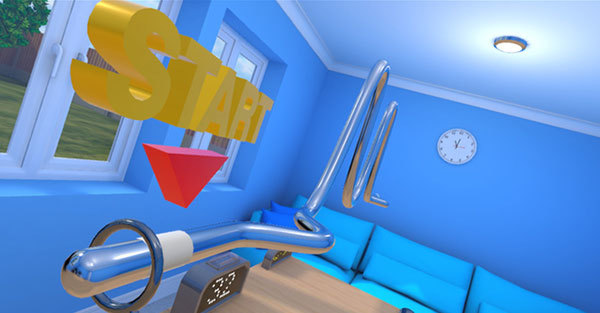 You can see that the game has a very relaxing environment, using a calm bluish color, nice weather and very bright and colorful environment. Everything was made to make you feel calm and relaxed and get ready for your next challenge.

As you can see from the screenshot above, you start from one side and need to guide the metal loop to the other side. There is also a timer on the table that tells you how much time is left. If the timer reached zero, you fail. There are 50 different rounds to complete. This is a single player game, so you’ll be competing against yourself and your own high score. That being said, nothing stops you from inviting friends over and let them play the game with you,

This is also room-scale VR game and therefore the develop made sure players will be able to adjust the height of the pipes to accomodate different player heights. The game looks much easier than it really is, so don’t discard it just because it doesn’t look complex, there is more to it than it meets the eye…

The game is set to be released on June 2016, no exact date or price was given because as of the time of writing, the game was just Greenlit on Steam.

It looks like a great room-scale VR game for the Vive, I’ll definitely going to download it and give it a shot.

Here are a few videos of the actual game and the physical one.

The real-world physical one:

It could have been even better with procedurally generated pipes instead of releasing it with only 50 levels.

I enjoy seeing classic games being reVIVEd on the Vive Looks like a really fun game.I think the developer should add a multiplayer mode, with a few people playing on the same pipeline, like a racing game - that would be so cool!

the developer should add a multiplayer mode, with a few people playing on the same pipeline, like a racing game

That would be an amazing idea. I think I’m going to try to get in touch with the developer and share that idea with you. He already has a great starting point. I personally would ditch the timer in multiplayer mode and just let people compete against each other without a time limit. VREpic, that’s an Epic idea

We used to play it in high school, competitive MP mode can be awesome!

They should make more of these games, am I tired of AAA titles that promise and never deliver. Indie games turned out to be the holy grail for VR games, that’s why I buy indie games to support the developers.

Im so gona make a video of this on my channel was looking for something new to check out .

Im so gona make a video of this on my channel was looking for something new to check out .

What is has to do with the topic?