I have been making a local multiplayer game for the HTC Vive called VR The Diner Duo, where you need to communicate with each other to manage a diner together. There is a very substantial singleplayer mode implemented too, explained in 15 seconds here: https://gfycat.com/LiveSatisfiedChevrotain

The chef plays in VR and cooks the food, while the waiter is played on the same computer the VR-headset is connected to. The waiter takes orders from customers, serves them drinks and keeps them happy while they’re waiting for their food. 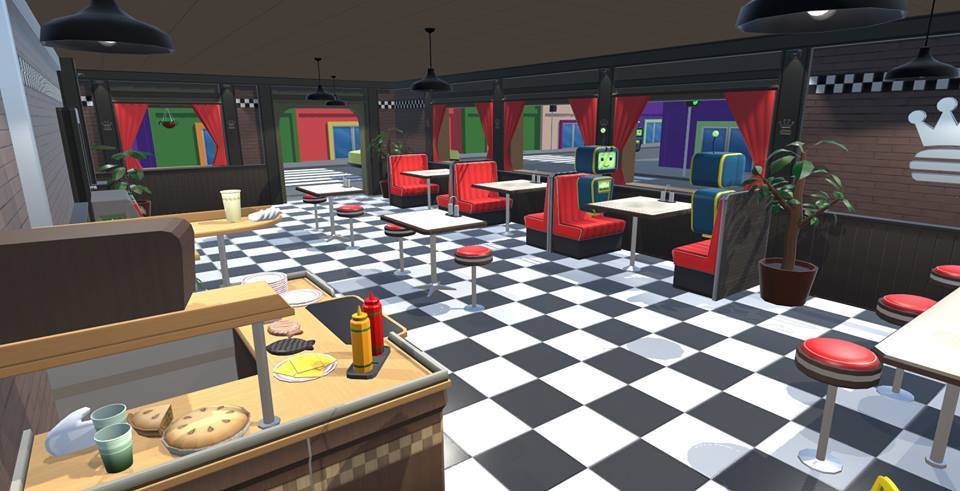 If you like our game and don’t want to miss the release date, then sign up on our newsletter. It can be found on our website www.vrthedinerduo.com along with our alpha trailer, in game phootage and more!

A restaurant simulator, what a great idea for VR, especially the social multiplayer mode. From what i can tell from the official website, it only supports the HTC Vive right, not Oculus Rift?

Yes, it’s because we have developed it for the HTC Vive, however the Oculus Rift can use it but might need some tweaking. We will not market it for Oculus until we are 100% sure

I will look into adding it for sure if/when I get my hands on a Touch.

Looks really cool. so the idea is to server food and satisfy the customers. Are there any challenges, levels, what’s the goal of the game or is it just a simulator? BTW I really love the design.

According to their site, you need to satisfy customer orders in a limited amount of time,. Customers order food and you need to serve them their food and do it as quickly as possible. There is a progression system so it seems, you need to develop your cooking skills to master the recipes to progress through. There are 30 levels and you can even play with your friends locally. There is an endless mode that you can play until you fail. So it’s not just a simulator, and looks like a really fun and challenging game.

Oh, nice with so much response!

Thank you, we are very pleased with our graphic artist on that one so far

We posted like the exact same second.
And yes, everything you say is correct. Nice to hear you find it fun from reading about it

First of all, the game looks really impressive from first look. I don’t know if my little brother will play it because he is a waiter and when he gets home I think that’s the last thing he wants to do is to serve other people in Virtual reality

Jokes aside, Is there any plan for an online multiplayer mode the main focus is currently on local multiplayer? Any score and global leaderboard?

I also don’t see the game on Steam, do you have any plans to submit it to Steam?

The game reminds me of the game Sluggy’s Fruit Emporium for the HTC Vive, but VR The Diner Duo looks more interesting and it has multiplayer as well. I really like playing VR games that simulate real life activities, especially if they employ a competitive multiplayer mode.

Spooky, are you buying the Destiny expansion?

Thank you!
Haha maybe not, but it’s always nice with some variation in the Steam library

We will not add online multiplayer. We developed the game only as a local multiplayer game, but after some useful feedback we decided to add single player and will put all efforts on what we currently have

How many players can play simultaneously locally? When you said local multiplayer, do you mean over the network or people can play together on the same computer. Oh, can I play with a friends that doesn’t have a VR headset, or it’s a VR-only game?

I will answer both your comments

Firstly: thank you! Right now it is two people playing together. One in the Vive as a chef and one on the same computer the Vive is connected to, as a waiter. The waiter plays on the keyboard or with a controller on the computer

There are recipes you follow right now, they hang behind you in the kitchen, in the beginning you’ll need to peak, but after a while you remember a few of them.

The difficulty gets higher for each level, both in numbers of customers but also in how many ingredients you have - leading to more variations of recipes.

However, the orders are somewhat randomized according to difficulty of the levels.
A level five customer will for example not always start with a cheeseburger and two sodas, it could be three cheesburgers and no soda, or one dubble cheesburgers and 2 sodas etc.

I really hope you followed my explanation haha!

Of course I am

The more you explain the more I understand about the game, which isn’t that obvious after reading the press release from the official website. I really like the fact that I can play as a chef and my brother can be the waiter

Is there a limit of time per serving or it’s a global time to serve all customers?

Yes, we have had siblings, couples and friends in mind while developing. It’s nice to hear you like it

We wanted to keep it short on the website and not have people drowning in information haha, but I’m glad to answer in forums like this

One can say that each customer has a timer. So you need to serve each of them quick.
Their faces starts green when they’re happy, but then turn yellow and before they leave they are red. So you need to management who to serve first.

Right now we are experimenting with desserts, which the waiter can give angry customers to keep them happy a bit longer, that way the chef get some extra time to finish the orders without the customers leaving

Right now we are experimenting with desserts, which the waiter can give angry customers to keep them happy a bit longer

Coll feature love it.This game has more depth than I imagined. I think it’s a bit similar to Overcooked. I didn’t play it yet, but friends of mine played it on the PS4 and loved it. It’s not a virtual reality game, but the animation and visuals are really cute from what I’ve seen. Playing this type of game in VR can be even more fun and immersive obviously. I plan to get the Vive in three weeks or so, so I’ll definitely going to signup and check the demo of your game.

Thank you, fun to hear and congratz to your Vive

I would recommend Overcooked, an amazing game! Try it if you get the chance.
We don’t have much gameplay in common though, but we share co-op and restaurant theme, as well as a hectic touch on the game