What defibrinates this game compared to other VR Table Tennis games is its visuals. The game features voxel/boxy Minecraft style visuals, that many people love. I first thought that the game won’t feature true-to-life gameplay experience, but in fact, VR Ping Pong features one of the most realistic physics I’ve seen in a VR Table Tennis game. As I mentioned in my preview, the developers have spent a great deal of attention to the physics, making sure that this room-scale game gives a true-to-life Table Tennis experience. There is a long post about the game physics on Steam, including some math equations that describe how the physics works.This means that the frictions of the ball with the paddle is taken into account, so players can do backspin and topspin and the ball will take angular velocity. Also the harder you hit the ball, the faster the ball travels. am not a physics genius, but after reading that post, I can really appreciate the effort the developer is putting to make VR Ping Pong really immersive in VR.

Some players mentioned that a haptic feedback is a must and I hope that the developer will add it in future updates. Of course above all that, for me what matters the most is that I can play Ping Pong without needing to go down to the building basement or visit my father in order to enjoy playing a Ping Pong Game. 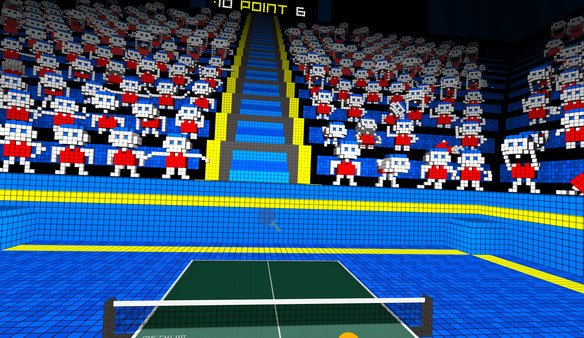 That being said, it would have been even more amazing if we had an online multiplayer mode, so we can compete against other human players online, not just against an AI opponent.

I highly recommend this game to everyone who enjoy playing Table Tennis, has the HTC Vive headset and searching for a great room-scale sports game to play. If you buy the game in Early Access, you support the developer and you can also submit your feedback and help this game become even better.

Even without realistic graphics, it’s one of the best Ping Pong out there, even in its current development state. I’m sure that many people would have preferred a realistic version, but I think that’s what makes the game so unique.

Keep in mind that VR Ping Pong requires an HTC Vive headset and although no minimum play area is mentioned, you probably need at least some room for hand movement without hitting anything inside the room, things can get pretty intensive once you start playing it.

The game looks great, I told my brother to buy it today, Hopefully I can play it today and provide some feedback. I really loved playing Ping Pong when I was younger, but haven’t played it for years. It’s so amazing how the HTC Vive revives many real-life sports and activities, that without it, you probably wouldn’t play it, at least as frequent as in virtual reality. It’s also a great game to lose some calories, and I need to lose some

I listened to you and I tried it, exceptionally good. I didn’t expect it to be so good. I love ping pong, so it’s great that I can just grab my brother’s headset and playing ping pong in my little room.

I liked this game very much too. Have you tried the other ping pong games as well? what are the difference?

This one feels much more realistic than the other I played, which felt more arcadic. That’s why I love this one more than the others.

My favorite Ping Pong game for VR. When I first so the graphics I thought ho boy, what the hell was the developer thinking, played the game and wow, so much fun and the physics work so well so even if you are not a fan of this lego-ish graphics, you still enjoy it alow.

Best Ping Pong game yet. Although others might look better,I mean more realistic, this one is more fun than all of the others.

Played it today, enjoyed it a lot, highly recommended.

I tried Eleven Table Tennis for the quest, best table tennis VR game that I played so far, absolutely a blast!