Is it just me or anyone else agree that VR games prices are ridiculously high? I would have accepted it if we have gotten a reasonable content in return of our investment, but most of the games are only 2-3 long and have a relatively low amount of content. In fact, many of the games that I see on Steam are still in Early Access, and even those are quite expensive as well. What’s wrong with this industry? - from a (very) frustrated gamer. 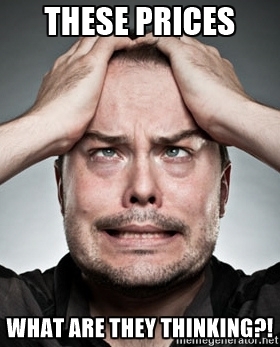 Yeh, I feel you my friend, but you need to understand something. If indie developers could have come with a more friendly price, they would, it’s all about the market demands. It takes a developer a great deal of effort, time and money to create a high-quality game. The problem is that as the current VR market is relatively very small, and if they sell it for a low price, the lose money. The only way to survive as a VR developer is to price the content at a price that has the highest chance to at least give you a return on your investment, and hopefully, give you profit.

When the market grows, prices will be more affordable. It will take some time, though. As for now, there aren’t many triple-A titles, and most of the titles are from indie companies. Without small companies putting a great deal of effort to revive the VR market, I can’t believe that neither the Vive or the Rift could have flourished in the first year.

The same will be when the PlayStation VR is out, it won’t be any different, so we need to prepare ourselves to pay a premium price for games that we probably wouldn’t pay has it been a regular non-VR game.