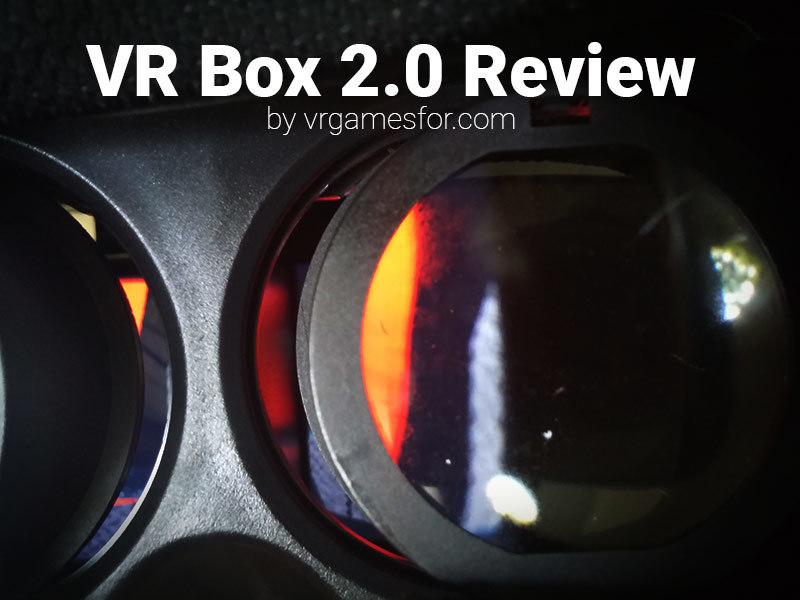 I’ve got my VR Box 2.0 today and had plenty of time testing it and playing with it. The first thing I’ve noticed is how light and it is. It’s also very comfortable to wear and the scotch strip are very easy to adjust. The only thing that bothered my just a bit is the nose area. I felt a bit uncomfortable, like there isn’t enough room for the middle part of my nose, but really, just s bit. 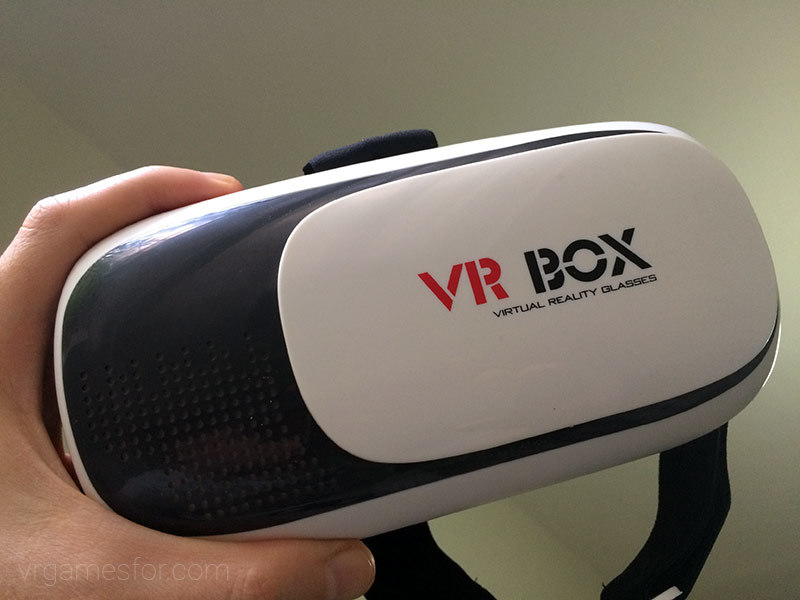 The cushion part at the back is so soft and comfy, and that’s why I could wear the headset for half an hour straight without feeling any discomfort, especially considering the fact that the headset sits against your face. Overall in terms of ergonomics I am happy.

Another great feature is the diopter adjustment. You can move the VR Box 2.0 lenses left, right, front and backwards. It’s not very fine adjustment because it uses a sliding mechanic rather than a wheel. This is a really important feature, because when I first put the headset and watched VR Roller Coaster, it was blurry,. I tried to move the phone a bit to the left but than I figured out that I just need to adjust the lens distance from my face, move them closer to my eyes and then the 3D magic appears and I was inside the virtual reality world, seeing everything in stereoscopic view. 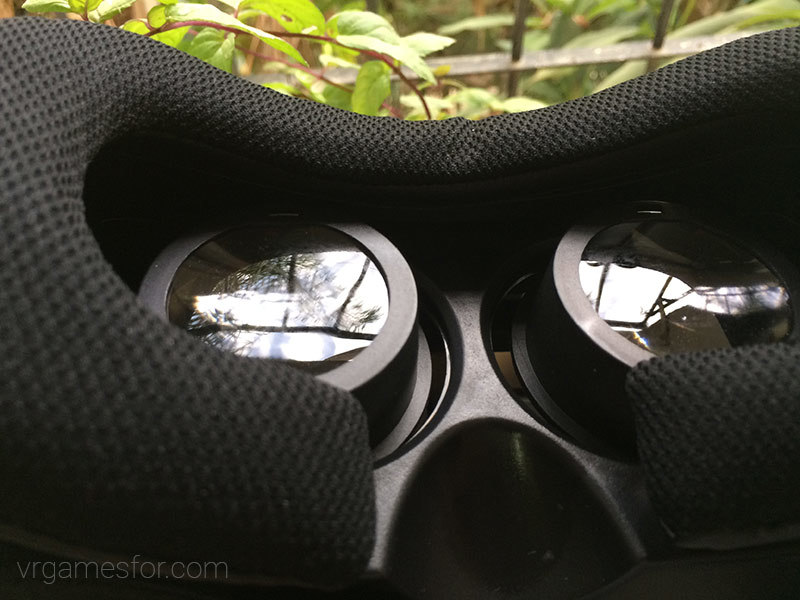 The VR Box 2.0 slider is very easy to use. You just put the phone inside the tray and slide it in. It was very easy to use with small phones like my iPhone 5S, but with my LG G4 it was a bit tricky for some reason, it was really on the edge in terms of height, but I was able to insert it at the end. 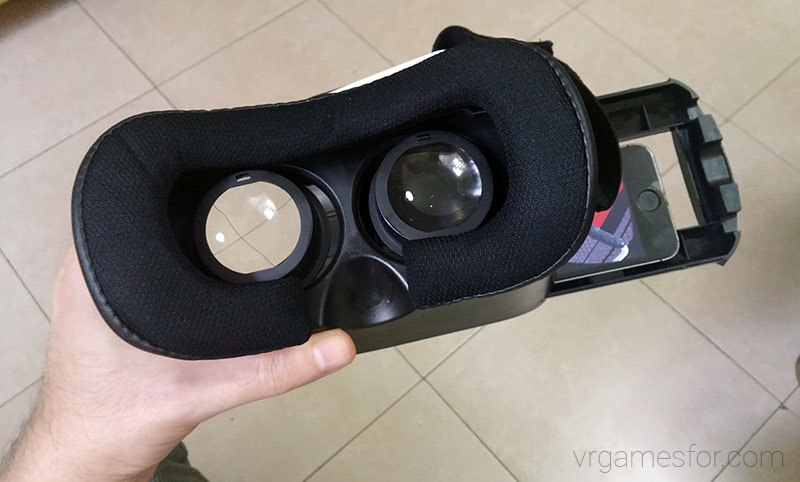 The headset is made of plastic, feels kind of cheap, but not too much. Thhe VR Box 2.0 is supposed to be a more comfortable alternative to the Cardboard. I can wear it on my head and don’t need to hold it against my face. It’s great when you want to play games or watch 3D videos more than a a minute or two. 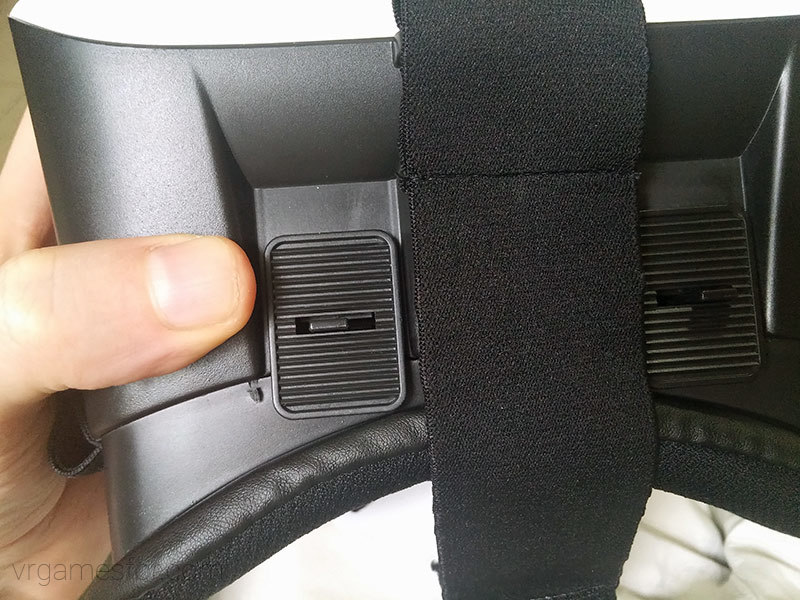 The lens quality seems good, but I can’t really judge compared to other headsets unless I compare them side by side.

People asked my about pixelation. I just want to say that you CAN see the pixels. It’s visible especially on the iPhone 5S, The higher the screen resolution the less apparent the pixalation is.

Here is an image which I made in Adobe Photoshop just trying to show how I see the pixlation when playing with the iPhone 5s inside the VR Box 2.0. The iPhone 5s has a 4-inch display and 640x1336 pixel resolution. Of course the higher the pixel density, the less visible the pixels are. So it can only get better with higher pixel density displays. 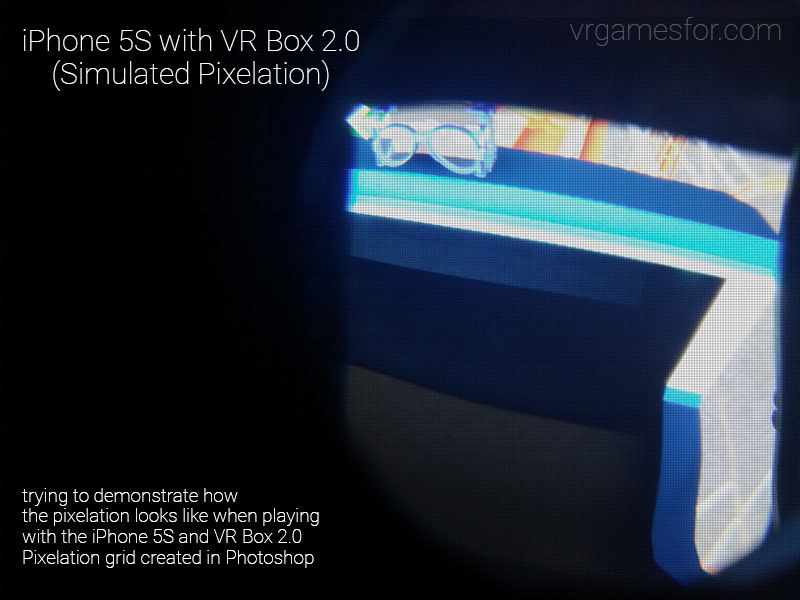 The screen obviously plays a crucial part of the experience. A larger screen will also cover more of your field of view, so if you have several smartphone, use the one with a larger screen and the one with the highest pixel density. The VR experience is still fine even with a 4-inch display, at least for newcomers just trying to get a feel what VR is all about. 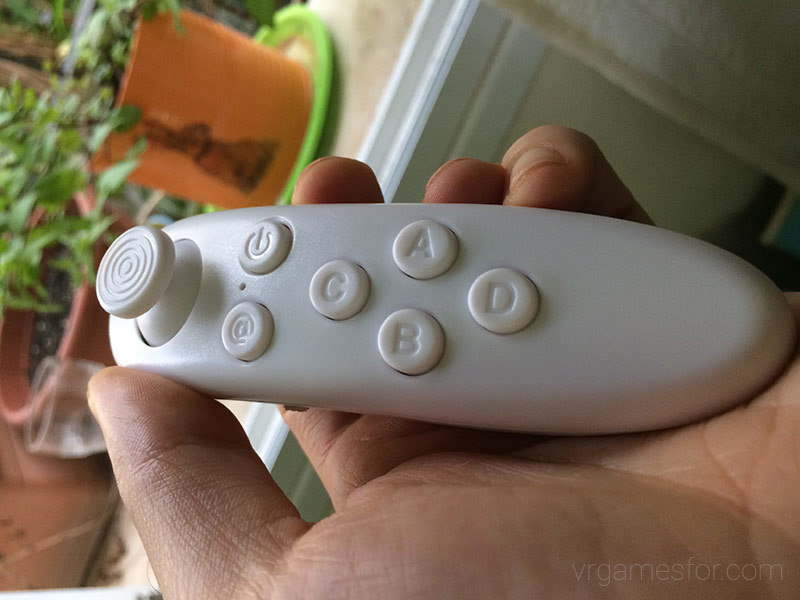 The Bluetooth controller is feels cheap and I didn’t actually play with it yet.

Overall I am pleased with the VR Box 2.0. There are better Google Cardboard-compatible headsets out there, but it’s a very good VR headset for those who are just making their first steps into VR and those who are searching for a better Cardboard alternative, something more comfy and durable.

This is it guys. I hope you found this little review useful if you ever plan to buy the VR Box 2.0 and still wasn’t 100% sure whether this is the right headset for you. If you have question, please don’t hesitate and asked me everything and I’ll do my best to answer all your questions. Thanks.

Thanks so much Spooky for the review! I didn’t get mine but I guess I’ll get it in a few days. So great to hear that you like it. I know it’s cheap but it’s a good alternative to Cardboard in my opinion. Again, thanks a lot!

I’m glad to found it useful and I hope you enjoy yours as well. Tell me when you get it.

Get review Spooky, looks like a good cheap VR headset.

The screen door effect is probably terrible with the iPhone 5S, I can’t imagine myself playing with anything the is lower than 400 ppi. The iPhone 6S screen has 326 ppi pixel density, which is very poor.

Yes, the ideal is from 800 dpi and above, just give it time.

Yeh, playing with a 4" display is certainly far from being ideal.

Thanks for posting this review. I am looking for a good brand of VR Headset right now.

I would like to know more from those who have tried other brands. Thank you!

You welcome. I find it to be a good headset, I actually have two of them, one with slightly different cushion material but they are comfortable and useful for enjoying some Cardboard games and experiences.

I gave one for my brother. He haven’t tried any VR before and he was so thrilled to try it for the first time. This is a great headset to buy as a gift for friends who never tried VR before.

Finally back to VR with my new Oculus Quest 2 headset. Nice to remember old times

I also stopped using Gear VR, and half a year ago bought the Quest 2. Best investment I did for VR gaming. I mean, we wouldn’t be able to experience games like HL: Alyx with the old gen mobile Vr tech, but they had their place. I was introduced to VR using those headsets because they were cheap and all you needed is a phone. They have my respect but it was time to move on. RIP VR Box 2.0

This ancient VR headset got a great deal of attention. It just shows that people wanted to get into vr but the entry price was just too high for them.