Hey again guys!
I posted a thread a month ago about my upcoming game VR The Diner Duo for the HTC Vive (Read it here: VR The Diner Duo - a local multiplayer game - #18 by Dev-Kev) and thought I might share some updates that’s happened the last month. 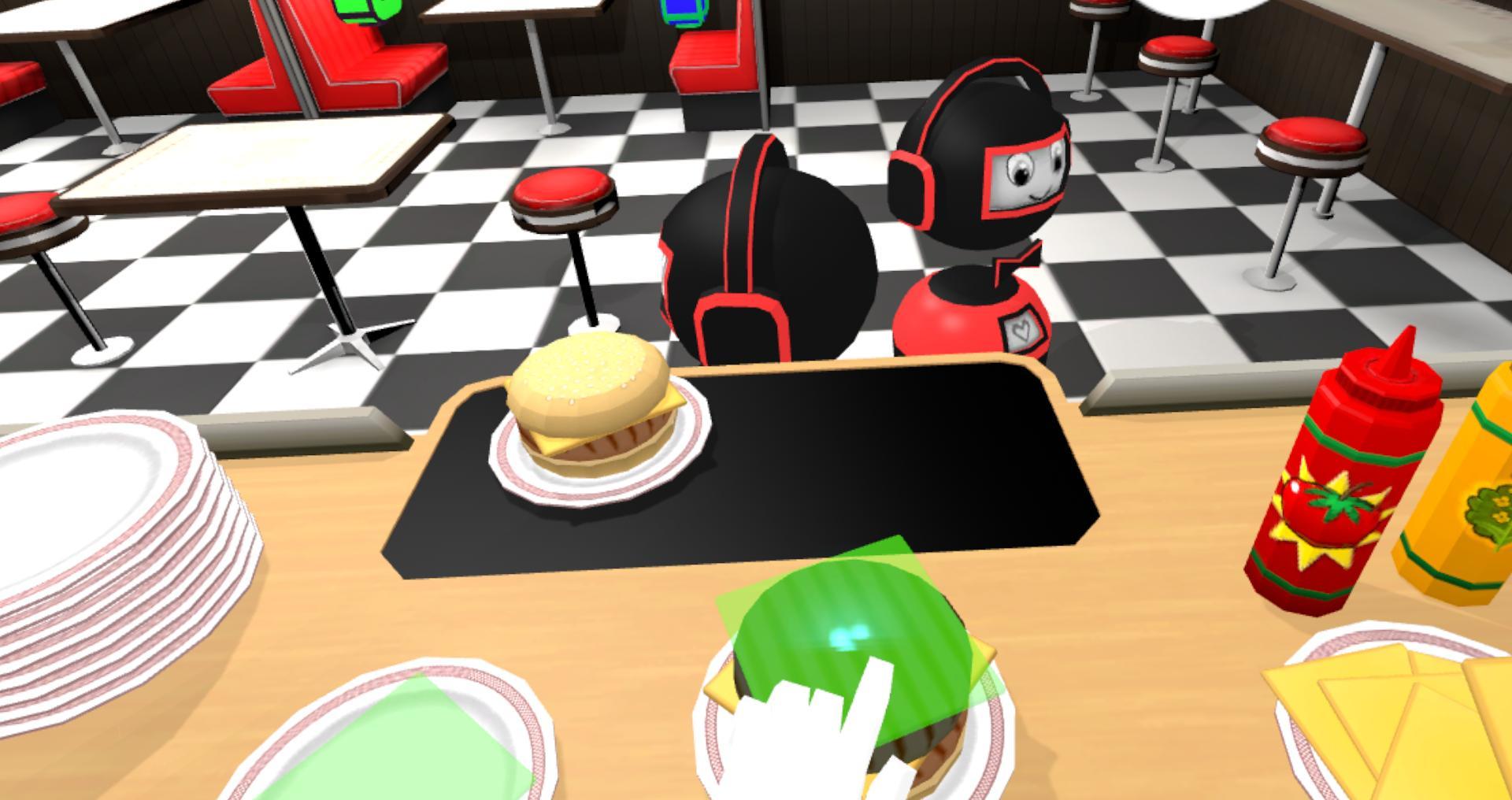 We have implemented a new menu, some youtubers and twitchers have played it, we have new surroundings, new customers, a score system, new objects, new customization etc. etc.

What do you think about the improvements? E.g some of them shown in the trailer, you like it or have other suggestions?

It’s great that you are pushing the game forward before its launch date on November. The new trailer presentation is very good and it really makes me want to jump into the restaurant and manage that little place. I am curious how crazy the endless mode can get. If you don’t mind, I do recommend updating the Steam page so we can know what new features were added. The last time I checked it was empty. Thanks and looking forward for the full release!

Thanks! I guess we did good with the new trailer then!

Glad you get that feeling because that’s what we’re trying to achieve. Endless mode can get really hectic and chaotic, both many orders and advanced orders will come your way.

I will start today and post updates. That’s a really good feedback. I have already posted one since your comment (check it if you want to). We got the Steam page up this weekend so haven’t had time to do much yet. But more is coming!

Hi Dev-Kev, first thanks for sharing your game.

I think the design of the game looks really refreshing, it’s colorful, humoristic and I like the little touch visual effects there. I love the fact that I will be able to play it with my brother locally, I always search for game like that. Just keep in mind that people like be rewarded for their effort, and a progression system can increase the replay value, especially for this type of game. I saw that you added some unlockable customization, which is great, but I wonder if you get any buffs, for example, to help you survive more time in the endless mode, or is it just for changing your character visuals and has no effect on the game?

Thank you. We want it to look and seem inviting for non-gamers too. We have a level progress system where one unlocks levels and a star rating system.

Regarding buffs, we have decided to make all unlockables purely cosmetic. That decision was made both due to time constraints and since we felt that adding the ability to upgrade stuff might make parts of the game feel like boring grinding, instead of a testing your skill.
We rather see that people notice that they’re getting skillfully better, rather than having kitchen upgrades

However with the star system and score system one can have bonus points e.g if you throw orders or serve them very quick etc.etc for the experienced players who wants some extra challenge. Also we will have a local leaderboard to compete in endless mode.

I agree, it’s like Overwatch, they don’t want to break the balance of the game, and still enjoy getting cosmetic stuff to just show off their achievements. Do you have a global leaderboard for the single-player mode?

We won’t have global leaderboards though…

Not because you gave them wrong, but because it might take too long to fix the order mistake

If they there to touch the chef, they are going to get rekt

Would be cool if you started out only knowing how to make burgers and learned to make new foods at you got better at it. Are there currently more things to make other than burgers? I feel a game like this could go a long ways having a good variety, the more steps involved the better i say…Like making a desserts even.

Yes, you start out easy with only burgers availble. The more levels you clear, the more ingredients to the burgers you unlock. Like cheese, cucumber, ketchup etc. The variation right now consist of three different types of “meat”, regular burger, fish and portobello mushroom

We have dessert too, apple pie. It’s not something you cook though, it’s for waiter to serve unhappy customers so they can wait a little longer on their food…

I like the idea of compensating customers to make them happy. Just curious, if the customer is cursing the waiter, can we kick him out of the restaurant

The new trailer on Steam looks really good. Is there just one type or restaurant or are there several places in which you can waiter?

Can you please tell me if there is French translation for the game, or is it even needed, because my brother doesn’t understand English only French.

You could let him starve though, but you’ll get less stars and score, will it be worth it? Only you can decide haha!

There is no translation for any language. We don’t use text

We have icons/pictures to explain in e.g the tutorial. Since kids will play it (and they can’t read) we have solved it that way

I’m sure he can play!

We have a few words and names in english/text in the menu such under e.g “credits” and “play” but you don’t have to read “play” since there will also be a “play”-icon under the word.

You know, an online co-op multiplayer really suits this game. I am just thinking, if you manage your restaurant well, you can move on to a larger restraint and have like 3 other players watering and like two chefs making food. I think the game has a great potential as MP but it looks great as it is now. I really like all the features that you’ve mentioned here. It looks very simple, but it has its depth and I’m sure it’s going to be quite challenging as you progress When the game is out I’m sure you are going to get much more feedback from players.

I will definitely be going to visit my cousin who has the Oculus Rift. I will tell him about this game, he loves cooperative games, I’m sure he’s going to get it.

There is no translation for any language. We don’t use text

We have icons/pictures to explain in e.g the tutorial. Since kids will play it (and they can’t read) we have solved it that way

I’m sure he can play!

Thanks a lot for clarifying this.

However, we do have “day completed” as text or “game over” but I think they will notice since you get confetti and cheers if you clear the day, and sad sounds and slowmotion effects when you have game over so it’s easy to understand, hopefully haha.

Don’t want to give you false impressions

Thanks for the feedback.
We have thought about larger restaurants and such, but don’t have the time to set up new restaurants sadly. We have it in mind, want to do it, but right now it all depends on how well the release goes

However, for the experienced players, the levels are chaotic in the end, we have local leaderboards etc. to challenge them too. I’m glad you’ll mention it to your cousin and that you like it!