To Learn Chinese character writing through VR——a unique experience offered by You Calligrapher.

“The temperament of brush and ink reflects the the author’s temperament”,this old Chinese saying just shows that in the process of learning calligraphy, we are not only practising our calligraphy,but also cultivating our temperament.

Calligraphy and painting are cultural symbols of the country, writing gives us more spiritual support and enjoyment.

You Calligrapher is developed by Patha Pradipa.The game realistically simulates Chinese calligraphy.The brush, ink, paper and ink stone at the beginning set a perfect mood for the game,the recollection is suddenly pulled back to the afternoon of practicing calligraphy,the feelings of character writing are still immortal in the game.

VR scene technology brings more realism to the game, a writing table is just settled in,on the table,the writing appliances are all prepared well.The only thing that you need to do is to select the appropriate calligraphy copybook to copy, You can create a new canvas freely as you like.The ink in You Calligrapher is also different from traditional calligraphy, In addition to black, other colors are also available,it’s up to you to decide whether to write or draw.

The game also integrates the calligraphy theory that “the unity of form and spirit” is advocated. The game attaches great importance to the strength changing in Chinese brush movement, The premise to ensure the strength is to do a good job of brush strokes.

Therefore, in the process of game production, the team of You Calligrapher has made real brush strokes to perfectly simulate the real brush operation effect as much as possible, so as to bring players a better game experience.

The calligraphy copybook function is also a feature of You Calligrapher . In order to better feel the writing art, players can choose to copy the master’s handwriting

and renew the scene of paper practice while playing the game.The calligraphy collection includes official script, cursive script, regular script and running script. Whether you have practiced calligraphy before or not, according to the repetition of strokes, you can not only relax, but also enjoy the growing joy of splitting fonts and making progress bit by bit.

Calligraphy itself is a work of great aesthetic value. The canvas in You Calligrapher supports the creation of handwritten poetry and articles. After the articles are finished, seals can be added for the uniqueness.

You Calligrapher hopes to provide calligraphy lovers and Chinese traditional culture lovers with an opportunity and possibility to better understand calligraphy, and strive to bring players a more real experience with better technology.

As a leisure and simulation game, You Calligrapher also pays attention to the player’s participation and experience sense in the process of the game. The construction of the game scene strives to be more realistic and specific, such as antique classic music is added. While writing, it adjusts the mood according to the relief of music. When the brush starts and falls, leisure and relaxation are carried out simultaneously.

The launch of the multilingual versions of the game on multiple platforms also means that calligraphy representing Chinese traditional civilization is seen and experienced by more people, which is conducive to further cultural exchanges.

In the game, players can choose to arrange their excellent works on the wall of the room, to transfer their writing ideas and enjoy more aesthetic works. 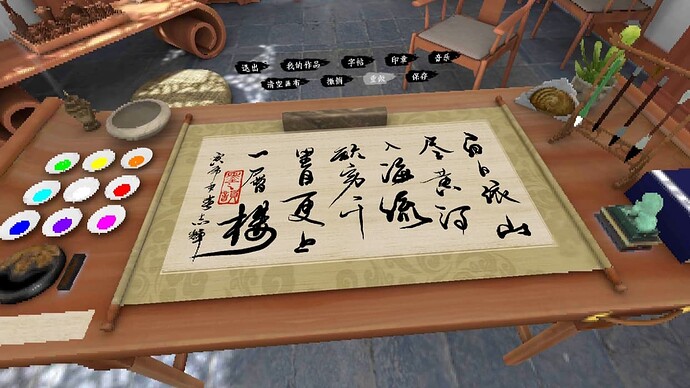