Today I played a very interesting VR game called In Da Hoop!. It’s an Oculus Quest 2 VR game where the emphasis is on various VR basketball activities and with hand-tracking support.

As you know, the Oculus Quest 2 supports hand-tracking. It can track your head so you can play Virtual Reality games without a controller, just using your two hands.

The cool thing about it is that it’s supposed to be perfect for basketball which you play with both hands. Question is, whether this will work well for this game, as the Oculus Quest 2 hand-tracking isn’t that great in my opinon.

I mean, I tried many hand-tracking apps before on the Quest 2, and all of them, although were nice to experiment with, let a lot to be desired.

I can say that the same is with In Da Hoop! VR game. But there are some activities, like the one for arranging the cubes that were fun. The basketball was so inaccurate, that it just leads to frustration. But it’s not because the developer did something bad, it’s the hand tracking on the Quest 2 that is just lackluster.

Nonetheless, you can always use the Quest 2 Controllers to play this game, and then it plays properly.

I want to share some funny moments, gameplay, and my thoughts after playing around with it. Keep in mind that there are plenty of different Basketball mini-games included and not all of them are presented in this gameplay video. 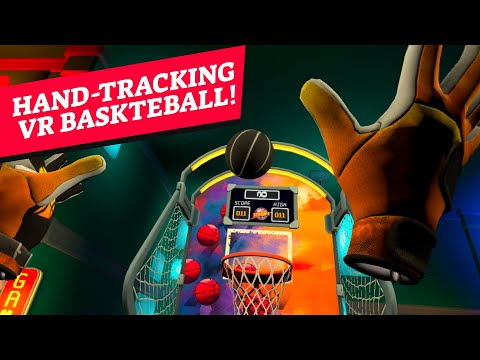