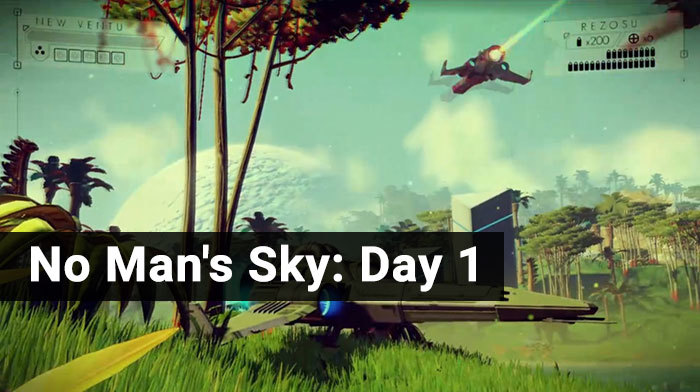 Day-1 is going to be the most exciting game for No Man’s Sky, both for the developers and the players alike. This is the moment where people will get a real feel of the vibe of No Man’s Sky and start exploring its lore.

###No Man’s Sky Screenshots flooding the popular social image sharing websites
This is also going to be a day that many players will share images of the planet that they randomly assigned to because every player will start its journey on a different planet.

I already see Reddit and Imgur being will be flooded with No Man’s Sky screenshots, showing if they were lucky to get a beautiful lush planet full of gorgeous animals, or whether they have been less lucky and have started their journey on a lifeless cold planet. This would be by itself an amazing day-1 experience and it will be interesting to see what every player got, it’s like kind of a lottery ticket. Obviously it wouldn’t last long because player will find themselves progressing through the game and being able to visit other planets, especially those who purchase the Limited Edition that awards you with the Rezosu Z65 multitool gun, Starting boost of 10,000 units and the Alpha Vector, which is a more advanced ship that already comes with built-in hyperdrive engine. You can use this ship to jump to the nearest solar system.

###No Man’s Sky will finally replace some of the Pokemon Go Videos on YouTube Homepage
No Man’s Sky Day-1 will be the day where YouTube will be filled with tons of videos showing the beauty of this procedurally generated world. Everyone will get a chance to see other parts of the universe that might be on the other side of the galaxy where they are. Quite amazing when you come to think about it. You can see a screenshot of a star and know that this player is nowhere near you, he is millions of miles away from you.

###How co-op multiplayer is like in No Man’s Sky?

Day one is the day that many players will want to be the first to meet other players and see how it is like playing NMS cooperatively. Players will want to be the first to experience that by themselves and posting a video on YouTube saying “Hey, I am the first in the world to meet another player”, and they will find their video in almost every popular gaming and technology magazine on the web, they will become a celebrity, even for just one day.

###No Man’s Sky Reviews
Day-1 will also be a day that those who haven’t bought or pre-ordered the game, will anxiously waiting to read early reviews. It might also be the day that some will write a review about the game, just to be the first to appear in Metacritic and enjoy the fruits of all that traffic.

###End of the Hype as we know it
Day 1 will be the day that the Hype will be over, at least for most of us. It will be an emotional day, a day that you put the disc in your PC or PS4, press the play button and you feel extatic, you count the seconds, you charish that rare moment, your adventure soon begins - are you ready for it?

Da-1 is coming soon guys, are you mentally prepared? What do you think will happen on Day-1?

One day 1 some people will finally stop playing Pokemon Go, that would be a revelation. I am one of those people, to be completely honest, I’m waiting for No Man’s Sky to force me out of my addiction to Pokemon Go, I had enough playing this nonsense game, time for a real adventure!

A day that some people will be hugely disappointed and upload a video showing themselves breaking the disc and their playstation. A first day that Angry Joe gives a 0 score for a game

. Going to wait for reviews, though.

A day that people will “Get Stuck” and Sean Murray released a day-one patch in order to take players out from where they stuck themselves in.

I have a good one. A day that people will finally realize that they have been fooled for over three years

I have a good one. A day that people will finally realize that they have been fooled for over three years

Won’t happen, but some people will be less excited than others than for sure.

Players are quit playing Pokemon Go and Seems addicted to No Man’s Sky. But some of them are not happy with Game.

Pokemon Go is still a mobile phone game and these are two different games. That being said, Pokemon Go does have an exploration element to it, in the real world, which is what makes the game so unique and very appealing to a large audience. I play it a few days, but for me it’s just a waste of time. I have better things to do than searching for virtual creatures in the street

So excited, NMS coming in a bit more than a week, can’t wait!

The release is taking too long, every day seems like forever.