Today I played a new tactical laser tag VR game for Oculus Quest 1 & 2 called Upenders. This game is available to download for free via AppLab, so it’s still in alpha and not the final version of the game. 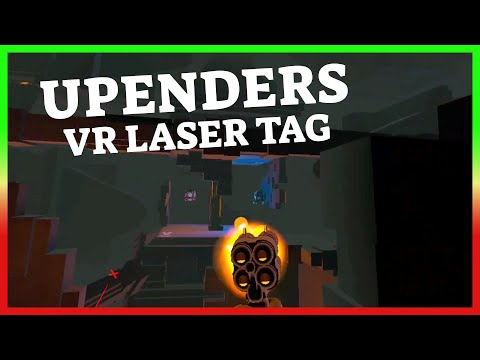 So what makes Upenders so special?
First of all, it’s a first-person shooter VR game. It features free movement, rotation and teleportation. However, it was optimized fo teleportation, so although you can move freely, you’ll be teleporting a lot to move around the map.

Now the level design isn’t like many of the other VRFPS games out there. It was designed with walls in various orientations, so you can actually walk upside down or at an angle to where you started.

This means that you can even spawn above a wall where a player is located from underneath. It might remind some of you of the popular game Portal by Valve, but here there are no portals, just teleportation onto walls.

This leads to very tactical combat where you can flank and surprise your opponents in many different ways.

So on one hand you have your weapons, with more can be found in the environment, and on the other, you use the teleportation device.

So although this VR Quest game is still in alpha, it plays very well and you can play against other players in online multiplayer as well

There are also robots that spawn, some belong to your team others to the opponent team and those bots can shoot you and eliminate you as well. So kind of PVE/PVP type of a game, but balance really well.

I highly recommend checking UPENDERS VRFPS game for Oculus Quest. The gameplay video above was captured on the Quest 2 VR headset. Enjoy.