I’ve heard a lot of good things about Swordsman VR game. It’s a melee combat virtual reality game for Meta Quest/Quest 2 (and other popular headsets). Swordplay is a lot of fun and much better than many other melee combat games that I’ve played before–but it’s not without its issues.

I played both the Quest 2 and then PC VR version afterward (downloadable via Steam). When it comes to hand-to-hand combat, the problem with VR is that you don’t get to sense the collision with the other sword or body and this leads to movements that intersect weirdly with the other virtual character you are fighting against.

This is a problem with all VR headset and developers try to optimize how the combat worlds with the hit spots to make it more convincing and authentic as possible. Some devs do a better job than others.

I think that Swordsman is among the better ones. Combat feels good overall, punchy and tactile as much as it possibly can but there is way to improve it.

You can fight with different weapons and shields and it has RPG elements to upgrade your character’s stats as you progress and get more upgrade points.

Overall, I do recommend getting the game if you love sword fighting games in VR and have a supported VR headset.

This is my full review of Swordsman VR I made on YouTube, so you can watch it and see if this game is good for you and learn about the pros and cons and see if anything is a dealbreaker or you are good to go and buy it. 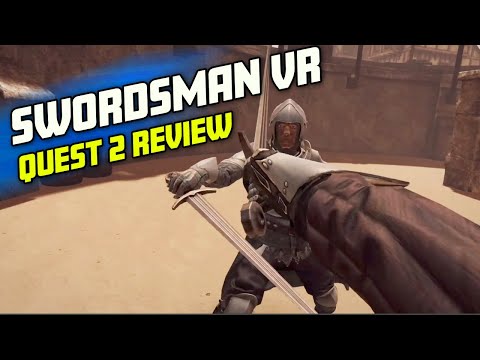 It’s a good game but Quest needs more advanced haptic feedback technologies to make these types of interactions better. However, it is still a good game overall.