Just read on uploadvr that EA is working on a new VR title, which its title is still unknown. Apparently, the company Criterion is the one to develop it, the same company who brought us the game series Burnout.

To be honest, all I care it get to see Battlefield in VR. We’ve already seen how amazing first-person shooter are in VR, Hover Junkers, Arizona Sunshine, Budget Cuts and Dead & Buried are just a few great examples. I’m sure that Rigs is also going to rock on PSVR.

EA can certainly build on one of its most popular titles, and one is better than Battlefield!

Are you serious? No way we are going to see Battlefield VR.

Now seriously, Battlefield VR, the perfect game to start 2017 with. Take all the known characters from previous games and make something like Dead & Buried with different type of maps and 64-player mode… day-one preorder!

I think that if EA is working on a new VR title, it won’t be Battlefield, it would be an original title. One reason alone is that the article mentioned that Criterion Games will develop it. and this company is known for Burnout and some Need for Speed games (Most Wanted, Hot Pursiot, Rivals), so I believe that it’s going to be maybe some type of a racing game, but not a Battlefield game, not a chance. 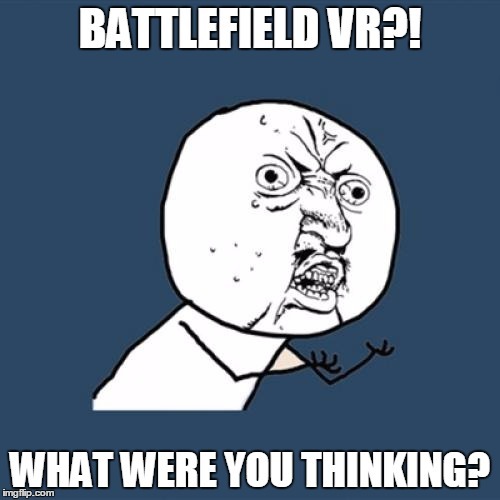 Why not, here is a guy playing Battlefield 4 with the Oculus Rift!

new Battlefield VR game would be great! but it’s not coming “soon”.

Don’t know about Battlefield VR, but I don’t mind playing a triple-A VR FPS game if you know what I mean.