If you own a VR headset, you probably wondered at least once why all the top-selling VR apps on Steam and Oculus Sture really haven’t changed much in years!

We are still seeing, Beast Saber always in the first place–for years! We also have Blade and Sorcery, Pavlov VR, Onward, Super Hot, and so forth. 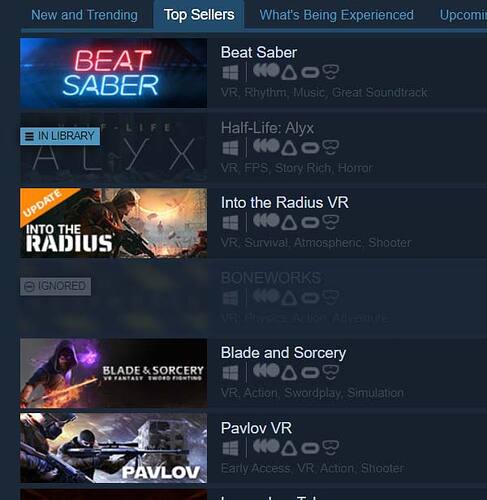 If you look at the PC top-selling, it’s so dynamic and can change every day. Whether VR is like frozen in time and stuck in the past. Of course we can’t ignore the total non-VR titles being released to VR, but even so, it shows that even a year can pass and very little is moving there.

Considering the fact that even with hundreds of titles to choose from, you probably only pick a few that fits your playstyles.

On the other hand, and I can speak for myself here, the place to look for games is SideQuest and Itch. Why? - Because there I can find plenty of free, low-cost and pre-release (which are also free) to play. As a VR player, even after a year of having the Oculus Quest 2 VR headset, I still want to experience different types of games in VR and see what I like and what I don’t.

I can’t pay 1/3 or 1/2 the price of a Triple-A game for a small VR game, regarding understanding the reason to price VR games as such due to demand and market size.

There might be some great games out there, but not many will try them because of the relatively high price of a VR title compared to a non-VR title. I think that VR game prices are high, generally speaking, compared to regular PC games and due to the medium restrictions, many of the games aren’t designed for long gameplay sessions or they are developed in understanding the market size and return of investment.

This is why many games are very short and many are made for high replay value and relatively short gameplay sessions. We only have one Half-Life: Alyx, which is by far the most impressive VR game made to date, no doubt in its genre.

Having said, once of the most important thing to at least make users discover great apps is focus on discovery algorithms and personalized solutions. This is to ensure VR players get to find games similar to that they enjoy playing or one that the Machine Learning algorithm suggested that you might enjoy playing.

If you look at Oculus Store you can see.

The ‘Top Picks For You’ was made so players see games that they might enjoy playing, including both popular, new, and less popular titles.

That being said, I spend more time on SideQuest, because there are more free titles there and this is why SideQuest is so popular—Because you can find free games.

Now, maybe some VR game devs should rethink their business model if they want to reach a broader audience—similar to mobile. Make their games free and try to monetize them maybe by limiting some features and make another full version, make in-game purchases, at least a demo players can try out, etc. Another option is to price the game lower, giving it a chance to reach a broader audience and therefore earn more by selling more.

I love VR, but visiting those stores and seeing a really anemic and uninteresting chance month after month just makes me sad. I found myself just preferring playing some good free VR games and a very good title about once a month and be done with it. I am sure there are plenty of people like myself in the same position.

On the other hand, because there are not many great VR titles, this means those (relatively) few that exist that conquer the selling chats get all the attention and stay there longer. It’s easy to stand out when there are not so many great VR apps and games, most noticeably when compared to standard VR games.

It’s easier to discover amazing VR games and one that does stand out, can become very popular very fast.

VR still hasn’t gone to a point that we get to see a very dynamic list of great VR games that many like and play on the Oculus Store and on Steam. A list that changes relatively frequently so we can try new games at affordable prices so we can spend more time in VR. Maybe also many developers just don’t see it as an attractive and profitable platform.

SideQuest and Itch still remain my favorite place to enjoy VR games. But still, if there were some really good VR games that I wanted to play, even at a higher price, I would probably be adding another game or two to play for a less affordable price.

This is why I feel that I already know what will be tomorrow on for the Oculus Quest 2 and I do check the large VR game portals to see which games are going to be released. Many games I don’t buy due to budget restrictions (very unfortunately) and I do hope that this will change.

When, maybe if Apple comes with its own VR headset and make many start developing for it as they develop for mobile, maybe then we will start seeing this market really moving forward. This market needs a boost, and although the Oculus Quest 2 is a huge success, it’s still not enough to take this market out of its sleeping bag.