I am a indie VR developer,First time here and Nice to meet you guys!

Hey,guys,I am A indie VR developer I am developing a VR game by myself now,It’s a hard but exciting times for me,I want your suggestions and encourage

this is one of my game scene screenshot,it’s a imaginative game,I love it! would like it? 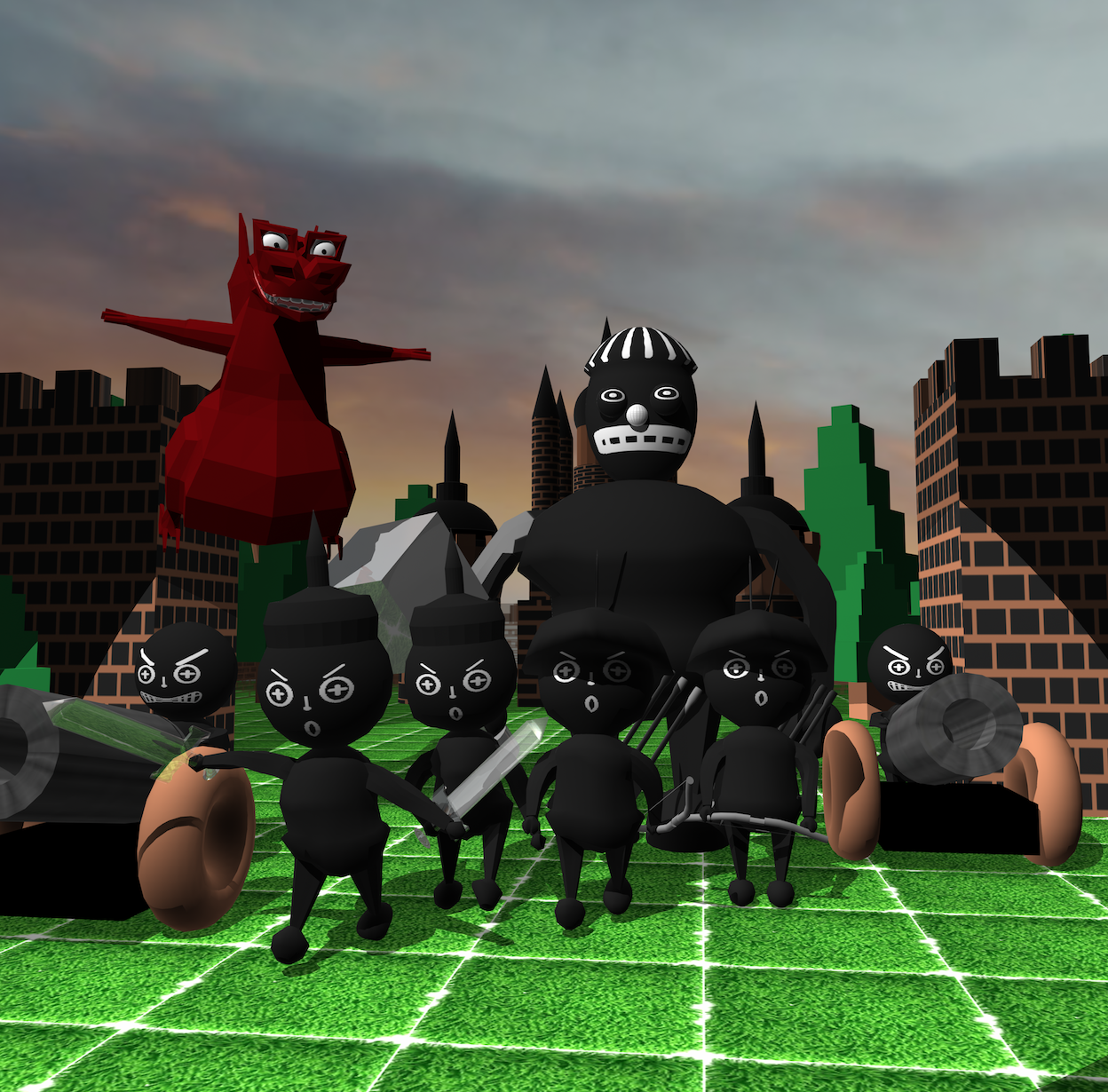 The image looks nice, suggesting a tribal action game, but please do share more information so we can give you a more contextual answer. We can help you in many ways but you have to be more precise of what you ask. A game can be really amazing even with the most primitive shapes, so a general answer to whether we like the screenshot (scene) itself won’t give you anything in a context that might help you out.

Thanks for you advise,yeah,will publish the details later, and share the latest progress.

Welcome to the forum my friend. We are excited to have VR game developers among us.

I love the design of the characters, look lovely and humoristic. I didn’t like the realistic sky that doesn’t well contrast the general 3D design of the characters and the other objects in the scene. Other than that, as VRnewbie said, we need more information to give you more detailed opinions. Thanks for sharing your creation and we would love to give feedback on the game once you release a demo or beta.

It’s encouraging to hear that you like my design,it’s a demo scene now,I will optimize the model design,the sky is a temp used texture

. I am focusing on game operation and story design now,I got the inspiration from the book-“Three body problem”,people find out that they are not the only intelligent creature in the universe,soon,they are afraid of each other,as the last fuse be broken,the war has begun.

I’d like to create a new world view, which might aways appear when we are child, I’d like to reproduce the image when we are pure kid,make the magic land to reality.

First time I hear about the book. I just went to Wikipedia to educate myself a bit. It is a Chinese science fiction novel, so you definitely should put a great emphasize on storytelling and unique visuals that might be inspired by the illustrations within the book itself.

After reading this quote by Aliette de Bodard: “…The Three Body Problem merges virtual realities, alien invasions and exciting science, and manages to make them all fresh.”” (source), I now see where virtual reality enters the picture.

I would be glad to hear more about the story behind it and how you plan to create a virtual reality experience that will help you tell the original story and incorporate all that into actual interesting gameplay.

Hey,guys,I am A indie VR developer I am developing a VR game by myself now

Welcome yangtaohehe, we love having developers in our community. We can really help in helping out in any question you have or if you need a feedback about anything while developing your VR game. A feedback is one of the most important aspects of a game development in my opinion. It gives you more confidence knowing that the features you want to have in the game are aligned (or not aligned) with what gamers desires. Please feel free to share what you can share about the game and I personally will do the best to help you out in whatever I can. I would love to provide feedback so your game will be an even better one once it is released.

First of all, welcome to the forum!!

I was just wondering, this suppose to be a VR game right, because it is categorized it under Augmented Reality section.

The scene look cool, like telling an ancient mythology story. You can certainly tell that it’s a fantasy game as the characters don’t resemble anything from our planet. The design of the character is basic, yet the character still have their personality because of the face of the little black characters. Look interesting enough to want me hear more about the game.

I won’t create the same story as ‘Three body problem’,otherwise,the author may take the royalty from me

(just kidding),I Just get the base world view from It,It’s a timely strategy game,like Warcraft or StarCraft,the terminal goal is keep your planet alive in the darkness-planet-system,save your army and destroy every potential enemies.

It’s the main loop model from my game,and the player will be the commander in the game,command the army to fight,and use diff arms restraint enemies arms,The most happy experience is that you could win when your army’s strength were so well-matched enemy’s.

And the game sweet cake is I have designed lots of props in battle,every level will show a new prop,just like the advanced of weapon in “Three body problem” called ‘water-drop’,if player get a new prop,they will feel like got a amazing magic which could fight every planet,but they will find out that the darkness-planet-system will appear more and more powerful weapons/props .
That’s base model of my game,but not all of it

Haha，,It’s a timely strategy game,like Warcraft or StarCraft,you are commander of your army,command your soldiers or props to destroy your enemies!Like Warcraft but It’s more than Warcraft!

ps: maybe I have choosed a wrong categoty:sweat:

So excited to hear that it’s a strategy game. I am a huge fan of this genre and I’m telling you that there is a great demand for such games in the VR gaming market. Strategy games have a huge fan base, they are more comfortable to play in VR due to the third-person field of view and in VR you feel like a god controlling other creatures below you.

One of the problems with strategy games in VR though is situational awareness. It’s harder to see the whole battlefield and navigate fast like on a 2D screen compared to a top-down view with more subtle movement system. It’s important to get it right. There are some articles about that on the web, but if you are designing a top-down strategy game, it’s important to nail those things right. There are developers who already did it right, so I recommend getting inspiration from them, just so you can nailed it right for your game.

Yeah,I am think about moving design,But some times I wonder that,If it’s a really battle,as a commander,It’s natural that you can not see the whole battlefield,Maybe it’s the reality means。
I am think about it

, and the link of articles web is?

Read this article. It think it’s related to the type of game you are developing. Search for the title “Situational Awareness is much harder in VR”.

Thank you very much

You welcome, I can read more about that subject if you need more recommendations. I love reading about the latest technologies and development recommendations that help developers create better games.

That’s awesome if you could give me more advises,as a indie developer,It’s really happy to have a great partner or proponent

Hi yangtaohehe, I really love the scene. I had enough of the futuristic robotic model designs in games. Yours is really refreshing!

No problem my friend, I’ll give it a good read later on today and share my thoughts with you.