I’ve been playing a new Instagram effect game called Flying Face. Lately, I’ve become kind of obsessed with IG filters. I love playing mobile AR games from time to time, but one I came across this Flappy Bird game for Instagram I was blown away.

This Flying Face game is similar to Flappy Bird, where players control a little birdy that flies up and down and you need to avoid getting stuck into walls and try to fly between the gap there. Anyways, the main difference between the flappy bird game and this one is that this one is played with eye blinking which is super cool. No need to tap on the screen, just close your eyes rapidly and this will control the bird’s movement. It’s still a very hard game and I think that with eye blinking it won’t be easier maybe even harder.

For me, it was OK, because I got used to it pretty quickly, but I’ve heard some people complaining that this game is too hard LOL.

To get that game, or maybe it’s better to say Instagram filter, you have to follow the developer who made the game. His username on Instagram is called dvoshansky. He is a developer from Russia who makes augmented reality filters for Instagram. This is not his first filter, but I think it’s the first filter that is actually a game rather than something to look at like a mask or camera effect.

After you follow him, you need to check your filters in the camera app. It’s there where you’ll be able to play this selfie game. 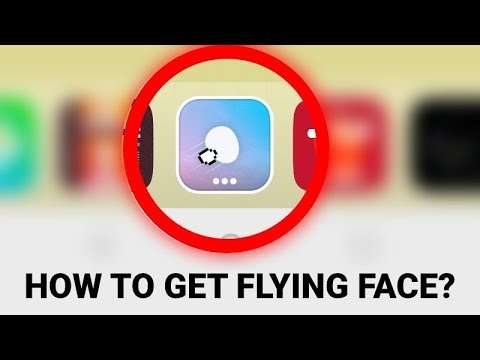 I call it a camera selfie game because this what it is. You play it while the selfie front camera is facing you. The entire time you play the game you’ll see yourself in the background. In fact, you are the background of the game, you and your surroundings.

The game has some neat features that don’t exist in the original flappy birds mobile game for Android and iOS. For example, instead of the bird’s face, it has your face, which is pretty funny. You can also play two friends together with two birds flying at the same time. It’s not an online multiplayer, but two people playing locally with the same phone, it’s really fun.

This is it, a short post about this new Flappy Bird Instagram camera game called Flying Face, make sure you check it out.