How it would feel playing No Man's Sky

We all watched a dozen of No Man’s Sky gameplay videos, we’ve seen many interviews and still many people are baffled understanding how it would feel playing a game like No Man’s Sky? They find it hard to categorized its gameplay to other titles, although the game is categorized as a Survival and Exploration game, and there are many games on the market falling into this category.

Although gamers do understand the core mechanics (i.e. crafting, trading, harvesting resources) from other games that they’ve played, there still is a variable here that changes the whole picture and this is the insanely huge scale of the area that the player can actually explore. It’s not the procedurally generated system that causes a confusion, because if the game had quintillion of planets that are not procedurally generated, people will still be debating the same question.

Even Seam Murray said that technically no other game has done what No Man’s Sky have done, at least not at that scale. Because the sandbox world is so large, and even a planet can be by itself much larger than many of the largest sandbox games out there, people probably want to understand if it’s like other sandbox exploration/survival games but stretched out on a very large scale, or whether the sheer size of the universe really adds any value to the gameplay.

This is a very important aspect, and I can tell straight away that it does add a great value to the gameplay itself, even without actually playing the game and please let me explain why. 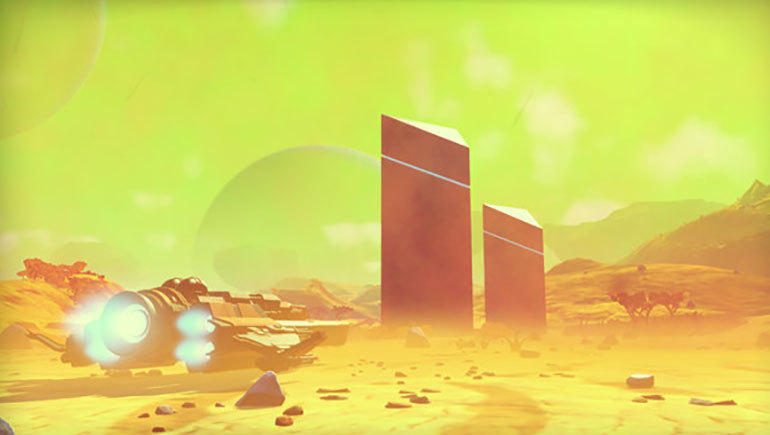 ###World Size Matters
The procedurally generated technology allows Hello Games to make the universe very diverse and each planet unique from other planets. If you flatten the 3D space into 2D one, you get separated worlds or levels. There are so many games that have finite levels, some of them are very short. In RPG games, for example, many developers always mention the scale of the area that you can explore. The Witcher 3 developer, CD Project RED, talks about the map being 3.5 times larger that of Skyrim’s world. Skyrim’s game world is around 39 square kilometers. The Witcher 3 world is also 3.7 times the size of the GTA world which is 36 square kilometers.

Fallout 4 developer, Bethesda Game Studios, also talked about the sheer scale of the Fallout 4 world, and some sites mentioned that it’s bigger than Skyrim but smaller than Witcher 3.

So in No Man’s Sky, instead of getting extra world space to explore or more levels (if you want to call it like that) in either a DLC and adding new content, Hello Games released a game bundled with endless DLCs with the biggest world even seen in a game. The great thing about it, that it doesn’t need to have 100 developers working on a new planet or new zone, the procedurally generated system creates it automagically and does the work of hundreds of 3D modelers and animators.

###Players Don’t Want yet another Walking Simulator
Many players have shown their worries about the game world being so big, because there are many other games out there that feature large worlds, but lack a lot of content. So you find yourself playing a walking simulator, just spending minutes walking from one place to another and nothing interesting to do in between - not that fun, isn’t it?

There should be a balance between the scale of the game’s world and the items that you can interact with in the game. It depends on the type of game obviously. If it was a car racing game, you wouldn’t mind having less interactivity in the world, but for an exploration game, you do want to have something to interact with every now and then. I remember how I enjoyed playing Final Fantasy XIV Real Reborn. It has so many things to do, and it had the perfect balance between the zone size and NPC interactivity.

No Man’s Sky is not an MMO and we already know that the chances of meeting other players are very slim. So that excitement of meeting other people, we can say that it almost doesn’t exist, because the chances are so small. No Man’s Sky isn’t an MMO but an exploration game. Exploration games should have a lower ratio. I other worlds, players expect the world to have fewer NPCs and interactive items spread in the world because they want to feel the great feeling of discovering something great. If it was a small map and many things spread around, you wouldn’ feel that feeling of excitement when finding something rare and useful.

The gameplay will be very interesting, because the world is full of interesting things to discover, and in fact, even the developers don’t know what you discover at a given position, no one does, which makes the whole exploration experience much more exciting. It’s not that you are going to visit a Wiki site and found that you can find a gold chest at a specific location, if you find something interesting, it’s because you put effort in exploring the planet and was rewarded for it, it’s because of you, not because of any tip of walkthrough video.

I know, sometimes we are tempted to view a walkthrough video when it becomes, though, but there won’t be any of those, so you won’t feel the need to peek and you feel more satisfied when you find something useful.

###Freedom of Choice, No Level Restriction
From the gameplay videos I’ve seen, we can certainly see that Hello Games did several things to keep the game well balanced in that respect. It made sure that players will need to work harder to find rare resources, but it also gives the player a complete freedom to decide what he wants to do next. If you find the planet a big boring and it doesn’t have what you need, you don’t need to stay there, it’s not a level that you need to complete. You can take you spaceship and move to another planet. If you are the type of person that want to explore every bit of space of the planet and maybe find something rare, you can do that as well, you are given a choice. You don’t have to be rank 50 to enter a specific zone. That being said, some planets will require that you be well equipped and have the right gear to survive.

Players also decide how they want to play the game. It’s not like many other games in which you are restricted to a specific class, and you have to be a higher level in order to explore other parts of the world. The game is the complete opposite of linear, all the options are open for you, you’ll decide your destiny in the game.

The gameplay, therefore, be really enjoyable, because you won’t feel restricted in any way to a certain progression path. This is one reason so many people like playing open-world and sandbox games because the pose fewer limitations and you feel that you play the game the way you want to play it, not as it was scripted by someone.

###Goals are created dynamically but the player always has a choice

In No Man’s Sky, you will love the sense of freedom from the moment you land on a planet. You will enjoy the fact that nobody tells you what to do and in which direction to go. You decide to go left, you go left and carry the feel that you are the first person visiting this place, no one saw it before, no one knows what there is over that hill or on the ocean floor. you find new life, you start collecting materials, you slowly learn how to build stuff and discover new technologies - and all that helps you to continue your journey for other sections of the galaxy, building your social interaction with the NPCs, decide what you want to do as you progress through the game. You do what excites you the most, at your own pace, with no worries of any competition or afraid of yourself that you want to peek to see how to finish the game.

The Survival aspect of the game is a balancing mechanism that will prevent No Man’s Sky to become boring, because if everything went smooth, there wasn’t any challenge, and without a challenge, players would get bored playing the game really fast. The survivability system is what poses difficulties and actually creates dynamic goals. For example, if you are on a cold planet, you need to upgrade you suit in order to explore it in-depth. So your goal, if you choose do accept it, is to find the needed materials to upgrade your suit. This is the dynamic aspect of the game, and it replaces the need for going to an NPC to tell you exactly what you need to do next (although it might be in the game in, but in a very limited way).

The procedural engine actually creates dynamic choices for the player to make. It doesn’t force it, but it navigates him to make a choice in order to fulfill what he thinks is best to make his adventure as enjoyable as possible. So the player always feels that he is choosing a path, but the world will guide him in its very natural way, like the real world. The No Man’s Sky universe has its rules after all, and those are breathing at your neck and giving you the feeling that this is an authentic world, you have your freedom, but it’s dangerous out there, and you need to spend time learning its rules in order to survive.

###Summary
All that unique awesomeness actually exists due to the procedural nature of the game. You can now understand that even in the vast universes of No Man’s Sky, the world was designed to both give the player freedom, make discovering more meaningful and rewarding, but also enforce the player in its natural way, to want to learn the universe rules in order to survive longer and keep that exploration enthusiasm alive all the time. You will continuously be setting goals for yourself and find your own destiny in the game. Visiting new planets would be like getting excited when a new DLC comes out for an RPG game. But in NMS you don’t need to have a future DLC because it comes out every time you ignite your spaceship engine and head up to the sky to find other planets. When you land on one, a new unique world is revealed.

It’s like playing a neverending exploration game. I remember playing many games that I just didn’t want them to end. I felt terrible when they did and all that was left is to play them from the beginning. No more! No Man’s Sky will give you that infinite adventure that you have been craving to get for such a long time.

Thanks for the in-depth post, you helped my body and mind get ready for the game, can’t wait. The more I read about the game, the more I believe that it’s going to be an amazing experience!