I played GORN on the Oculus Quest 2 and I wanted to share my opinion about it. I didn’t play the PC version and dived straight into the Quest version.

For those who don’t know, GORN is a humorous VR melee combat game. You play as a gladiator with a goal to defeat enemies using a wide variety of weapons and defensive items. However, this game doesn’t take itself too seriously. By that, I mean that the weapon can behave not as expected, and do not conform to their realistic physics counterpart.

The same goes for the enemies, which have a funny movement and more like rubbery dolls than human beings. It all leads to very entertaining melee combat and which makes this game so fun to play compared to those who are more realistic gameplay-wise.

Here is GORN gameplay video as played on the Oculus Quest 2 VR headset. 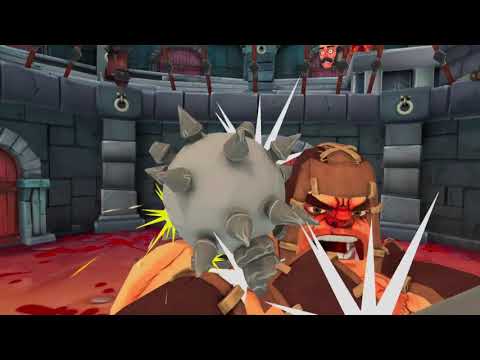 One word for the graphics. Those who played GORN both on the PC and Quest mentioned that the graphics are better on the PC and things look better overall and the gore looks, well, gorier. However, as you see in the above gameplay video, the graphics aren’t supposed to look realistic either. They are cartoony and therefore the visuals translate well to the Quest version of the game.

GORN also can give you some good exercise. I found it great for my daily exercise routine. I think one of the things that actually made me move a lot is the walking movement where you need to move the controllers like you are walking. Sometimes you need to move fast and this requires very fast hand movement. You can actually change the movement type to something else, but I actually like getting some exercise while playing VR games in general.

I also liked that the game has a large variety of weapons. You’ll be unlocking more weapons for the custom mode as you play the campaign. Gorn isn’t a hard game. At least I haven’t gotten to a point where I am stuck for many runs. I did fail several times yes but realized that I just need to be more aggressive with my gameplay and adapt to the new weapons in order to survive.

Most of the time you’ll be fighting against several enemies at the same time. This requires fast movement and utilizing weapons and shields that the enemy drops when they die in order to overcome the tougher enemies.

Overall, a fantastic melee combat game for the Oculus Quest 2. I personally now a big fan of melee combat games, but this one was a blast. I think that in general, melee combat games in virtual reality are just more enjoyable compared to the non-VR ones because you feel like you are holding the weapon in your hand. It’s a big difference in that aspect and why I do recommend players who don’t like melee fighting games in general, to try Gorn out.

This is it. Give Gorn a try if you have the Oculus Quest 2, I’m sure you’ll like it.